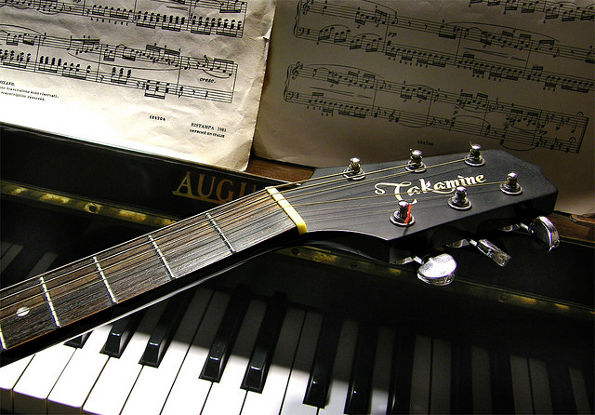 If you play piano for worship you’ve probably been in one (or both) of these situations.  Your worship leader or band leader has asked you to play “up an octave” so that you don’t “fight with the guitar” or you’ve been asked not to use your left hand at all if there’s a bass player or other low instrument playing with you.  I’ve been on both sides of this situation (telling piano players these very things and being reminded of them myself as I play under the direction of a different worship leader) and wanted to break down the “why” of why this is important.

Typically when playing piano, someone is used to having free reign of where each hand plays on the keys.  Each hand works together and doesn’t play “on top of” each other.  Imagine if you added a third hand to your piano playing.  Where would it go?  Would you put it in the exact same spot as what your right hand is doing?  Your left hand?  Besides being the only person on the planet with a third hand, which would be awkward (well, maybe a little amazing, but probably more awkward), it would be even more awkward to try and put two hands in the same spot on the keys and expect something that sounds clean to come out.  When another instrument is added to the mix and the piano player plays in the same octave range as that instrument, the pianist is essentially playing what amounts to both hands in one place on the keys.  The sound of the two instruments has begun fighting to be heard clearly.

Think of the Orchestra

People who write and arrange music for an orchestra must be thinking about how to blend and balance instruments in this way all the time, only on a much larger scale.  They must think about how to let the low strings be heard over the low brass, how to keep the whole brass section from overpowering the woodwind section, or when the flute or oboe should cut through the rest of the instruments to be heard clearly.  Essentially worship teams, and members of the worship team, must learn to do this same thing every time they are “arranging” music, only on a smaller scale.

Use the Whole Keyboard or Fretboard

Instead of feeling picked on as a piano player, realize that you have an opportunity to be a musical servant.  It’s much easier for a pianist to play up higher on the keyboard or not play the left hand at all than for guitar players to learn new chord shapes or for bass players to play melody lines.  The pianist has command of 88 keys and has the privilege of learning how to play them in a way that the guitar, bass guitar, and piano can all be heard clearly.

If you’re a guitarist, learn the different chord shapes that lend themselves to playing in a higher position on the fretboard (this is one area that I’ve committed myself to improving as a guitar player myself).  The pianist can then play in the middle of the keyboard where they’re used to playing. Learn to become a humble servant to both your fellow musicians and the music in order to create a much more clear and less muddied sound that draws attention to the lyrics instead of the music.

Does what I’ve written make sense?  How can you apply it to playing along with a vocalist or playing during prayer?