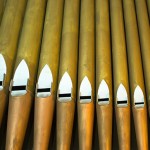 Thinking about the Organ in a New Way Ah, the organ. It seems to be an instrument that, for a long time, people have either loved or hated. It has seemed to become a dividing line in many churches, causing them to ask the question: “Do we keep the organ and potentially risk speaking a completely foreign language to much of our culture?” or “do we get rid of the organ for the sake of outreach and risk losing some of our faithful saints who have enjoyed its role for many years?”

As I’ve been trying to “figure things out” as a paid staff Director of Worship and Creative Arts for about a year now I’ve begun to wonder if the questions above present a completely false dilemma. That is, we think that in order to reach our culture we must either: split our churches into “contemporary” or “traditional” services OR get rid of “outdated” forms of worship altogether. I’m happy to see that other people are starting to think the same way (more on that in a minute), and are asking a better question: “Can’t we have both?”

My Own View Changing

First things first: I admit freely that the organ is not my preferred instrument to listen to or work with. However, the times I’ve heard a large pipe organ dominate a worship space, I’ve been significantly moved. But I’ve noticed a shift in my own heart taking place over the last several years and have been wondering what God is doing. I’ve had the pleasure of working with two very gifted organists over the course of the last few years within our own congregation, each passionate about the instrument and passionate about what worship looks like in the local congregation. While we have had our differences of opinions I’m thankful to say that being certain that I equip them to do what they love within the local church has given me a much greater appreciation for the organ, particularly its power and vast history within the church, as well as for both of our organists involved in the congregation.

So, our services have been “blended” over the last few years, where one Sunday we’ll have mostly hymns driven by piano and organ and the next we’ll have mostly modern music driven by a modern worship band. Through some healthy discussion with one of our organists I’ve begun to wonder if this is the wrong approach. What if we blend each service, with both historic and modern elements separately as well as fused together within the same service?

Others Are Thinking the Same Way

It turns out, as well, that I’m not the only one thinking about this and asking these questions. I knew of a couple of worship leaders that have a wonderful perspective on the “healthy tension” of rooted and relevant worship that Bob Kauflin has taught about and thought, “You know what, just for kicks, I’ll reach out to them on Twitter and see what happens.” Both of them were very interested, even to the point of wanting to talk about it soon. I’m looking forward to Skyping with both Jamie Brown and Zac Hicks this coming Thursday, as well as potentially talking to Chelsea Chen, the highly accomplished organist and artist in residence at Coral Ridge Presbyterian Church.

I knew that Jamie had merged pipe organ with modern music in the “A Thousand Amens” project. But I didn’t know that Zac had already spent a good amount of time thinking about this.

In the midst of me doing some research on what Zac had been thinking about the topic I came across two fantastic blog posts from him. The first, written back in 2011, muses on the greatness of the organ from a guitarists perspective. Zac had some wonderful things to say in it, but I particularly liked a comment he posted to address someone concerned that the organ isn’t as effective to reach a young generation. Someone had mentioned that for the sake of the church and for the sake of his yet-to-be-born daughter we should move forward sensitively (as in, move forward in getting rid of the organ sensitively). I love what Zac had to say in response:

Worshiping as a united body amidst a diversity of tastes and styles means that everyone has to die a little. You might be able to teach your child a much more profound Christian truth (than that “we must worship in our style) about self-sacrifice for the sake of the body. Imagine how impacted she would be by seeing THAT example!

I think he hit the nail on the head where he says that “everyone has to die a little.” People on both sides of rooted and relevant worship can become quite stubborn and dig their heels, saying, “I don’t think this style is going to reach people” when what often they really mean is “I don’t like it.” What if modern musicians appreciated the majesty, complexity, and “other-worldly” feel of classical music and what if classically trained musicians begin to appreciate the simplicity and “nearness” of popular music? Can both sides “die a little” in order to accomplish a grander vision, one where both God’s majesty and authority as well as his nearness and love are displayed, side by side?

To this point, Zac and Chelsea at Coral Ridge have begun to think about how to fuse the historic and majestic sound of the pipe organ with the culturally relevant sounds of modern pop/rock music. I love the opening track “Wake Up, Sleeper” from their recent EP “His Be The Victor’s Name” that starts with the authoritative and powerful sound of the organ and kicks the band into full gear just measures later. I love, even more, the fact that the chord progression the organ is playing at the beginning of the piece is a nod to Bach’s “Wauchet Auf” or “Sleeper’s Wake” or “Wake, Awake, for Night is Flying” as more people might know it (see more in the comments of the link above).

Zac also blogged recently about what this merging of old and new might look like in the coming days and how the organ could make a big comeback in modern worship.

Humility Will Drive The Future